25 Years of Interfaith Cooperation Celebrated: The Interfaith Network of the City of Greater Dandenong

At the Annual Gathering, faith and spiritual leaders (Baha’i, Buddhist, Christian, Hindu, Islamic, Jewish and Sikh faiths and the spiritual organisations of Sathya Sai and Brahma Kumaris) gathered to renew their commitment to work together in promoting peace and harmony in the City of Greater Dandenong. In a unique ceremony where the faith and spiritual diversity of the City of Greater Dandenong is celebrated, the leaders signed the Common Statement and presented it to the Mayor - a sacred ritual that has taken place for 25 years. 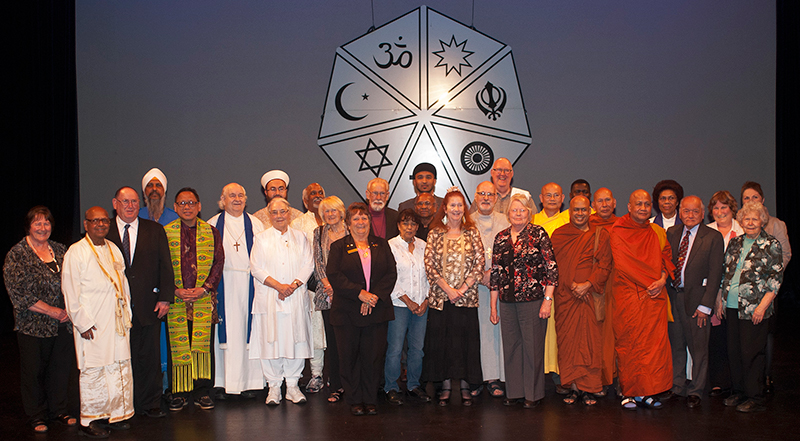 Margaret Coffey from ABC Radio National’s Encounter Program was a wonderful Emcee with performances provided by all faiths and spiritual traditions in the Interfaith Network (Photo Right by Brandsten Media) .

Following a Welcome to Country from Michelle Mills, drama, dance, singing and a reflective meditation were thoroughly enjoyed by all present.

The Interfaith Network was delighted to also have as special guests, the local Heatherhill Primary School singing their own composition “Possum Skin Cloak”.

The grand finale was performed by the ‘world-renowned’ Interfaith Bell Choir ringing out a requested favourite “Twinkle Twinkle” and a new performance of “Let There Be Peace on Earth” bringing the night to a joyous end.

Afterwards a delicious supper was enjoyed by all which included a beautiful 25th Anniversary Cake. 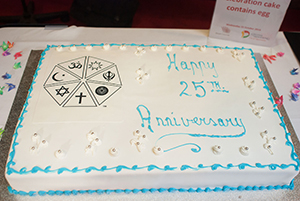 By Helen Heath
President, The Interfaith Network of the City of Greater Dandenong